How a trip to the local supermarket became such a privileged

Going to the supermarket used to be part of the rhythm of daily life – so mundane that it was taken for granted. But after weeks of lockdown in Shanghai, shopping in a store is a new-found luxury.

In some areas of the city where new cases of coronavirus are near or at zero, residents are being allowed out of their compounds on a limited basis to go to designated supermarkets and pharmacies.

To date, Putuo is the only downtown district that has “essentially achieved zero community transmission of COVID-19,” according to the government, and residents there are reaping the rewards of a health battle victory. 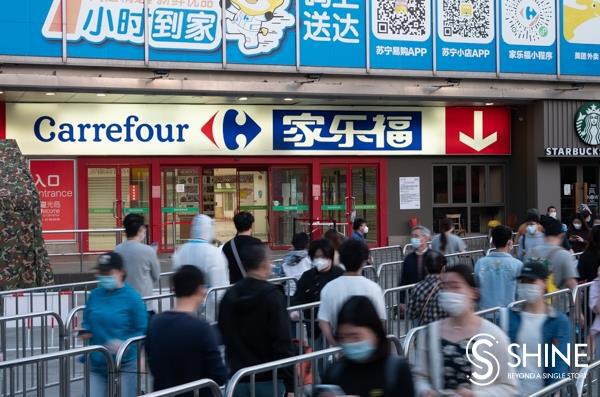 Wanli Subdistrict residents, who got government passes and “invitation cards” from Carrefour, line up in front of the supermarket’s Wanli store.

Chen Chonghou, who lives in the Zhenxinyuan neighborhood in the Wanli Subdistrict, waited in line more than 30 minutes in front of a Carrefour store.

“It doesn’t matter if the line is long, ” he said. “It’s been far too long since I’ve been able to go out and shop.”

Chen has been working to help distribute government passes for residents in 20 neighborhoods to get out and about a bit. The passes are limited in days and hours of usage.

He directs residents of his neighborhood to the local Carrefour supermarket along a designated route. After a long day of that duty, he finally entered Carrefour to do his own shopping – picking up items rarely bought in group buys, such as curry, cookies and plastic food wrap.

“The residents returning from the supermarket with full bags are very happy,” Chen reported on WeChat when he returned home. 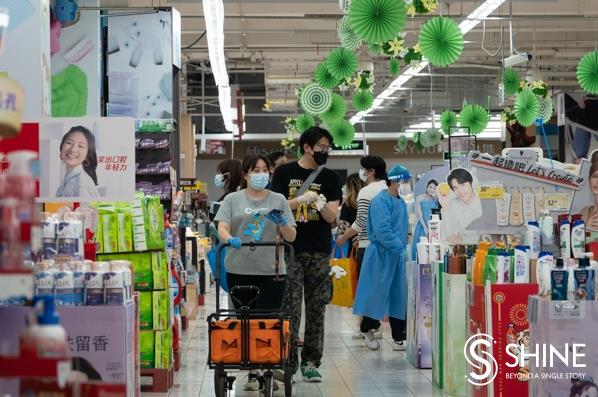 Customers who shop at Carrefour bring their own trolleys and baskets.

“We can finally get out of our compound!” said an elated woman in her 30s surnamed Li, who lives in Wanli. “It was such a pleasure to shop again in a supermarket.”

The “pleasure” is not without its own set of protocols.

Customers enter Carrefour in carefully controlled groups. They are required to show their passes, “invitation cards” from the store and negative nucleic acid test results. They have to scan a “location code,” then pass temperature and mask checks. The store doesn’t provide trolleys or shopping baskets; customers have to bring their own. 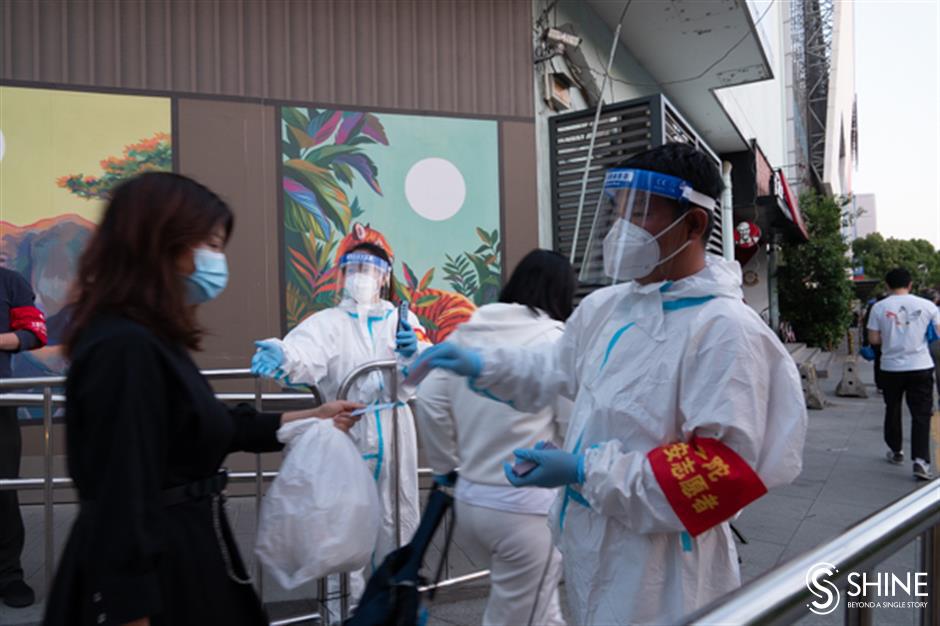 Customers enter the Carrefour outlet in carefully controlled groups. They are required to show their passes, “invitation cards” from the store and negative nucleic acid test results.

Shopping time per group is limited to 40 minutes, with 20 minutes of disinfection before the next group is admitted.

The outing was a bit stressful, Li admitted.

“The time was so limited that I had to rush, and that made me sweat with anxiety,” she said.

Carrefour restricts purchases of boxed pork, eggs and vegetables to two boxes per customer. In addition, no person is allowed to spend more than 300 yuan (US$45) to ensure that there is enough stock for all customers. 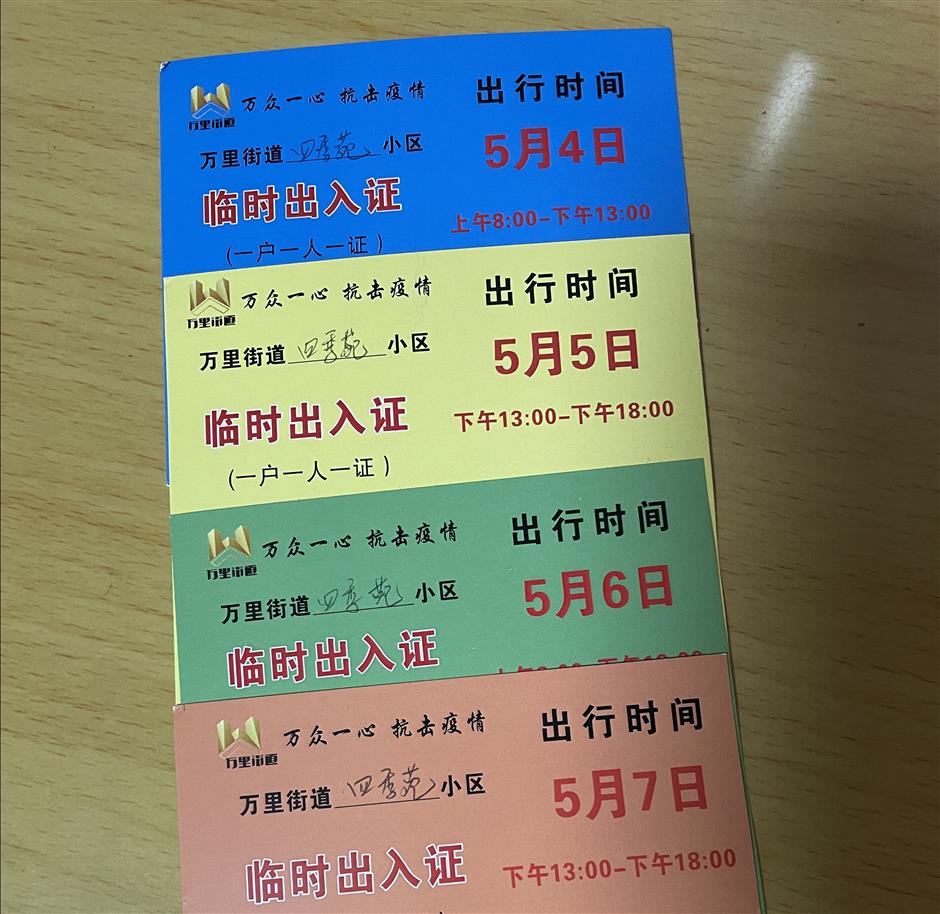 Government passes for residents in some compounds of the subdistrict to go out at certain hours for activities, including shopping at nearby supermarkets. The days and hours of usage in the passes are limited. 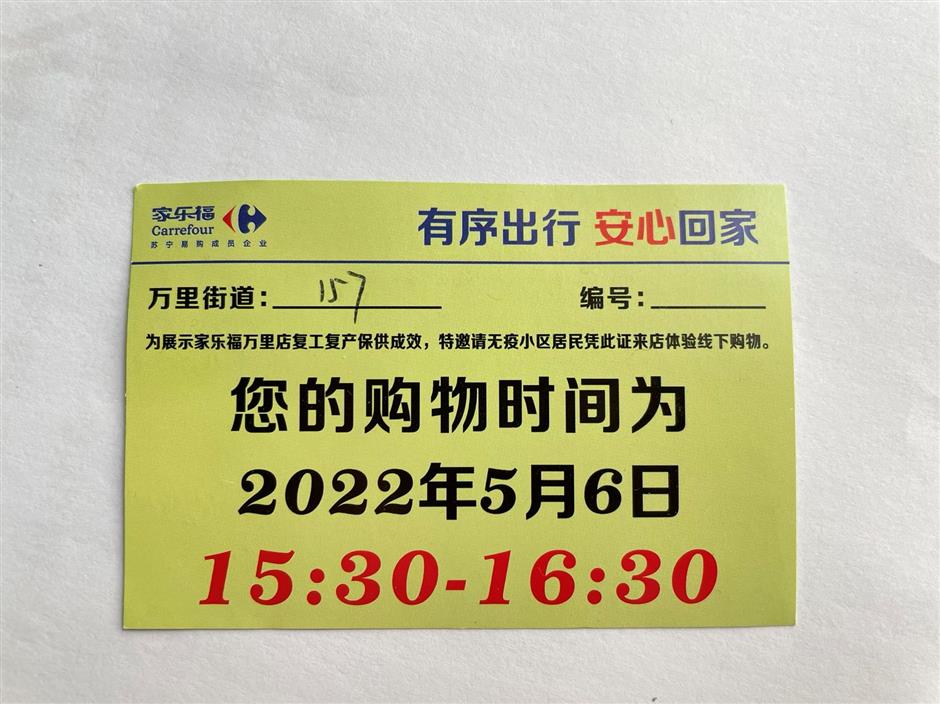 An “invitation card” from Carrefour Wanli.

This caused difficulties for Li at the checkout. Her bill was approaching 300 yuan when her basket was still half full. After some hesitation, she forfeited beer, Coke and potato chips.

“I’ve wanted to buy these things for a long time,” she said. “They are usually hard to get in group buying. But after all, they are not necessities.”

A purchasing manager at the supermarket, who identified herself only by the surname Wang, told Shanghai Daily that the store is currently well-stocked and prices haven’t changed.

She said that Carrefour began planning for resumption of service in mid-April. After basic supplies were brought in, she ordered snacks for customers long deprived of their favorite comfort foods.

“Now we have ample stocks Lay’s, Oishi, and Orion potato chips,” she said. 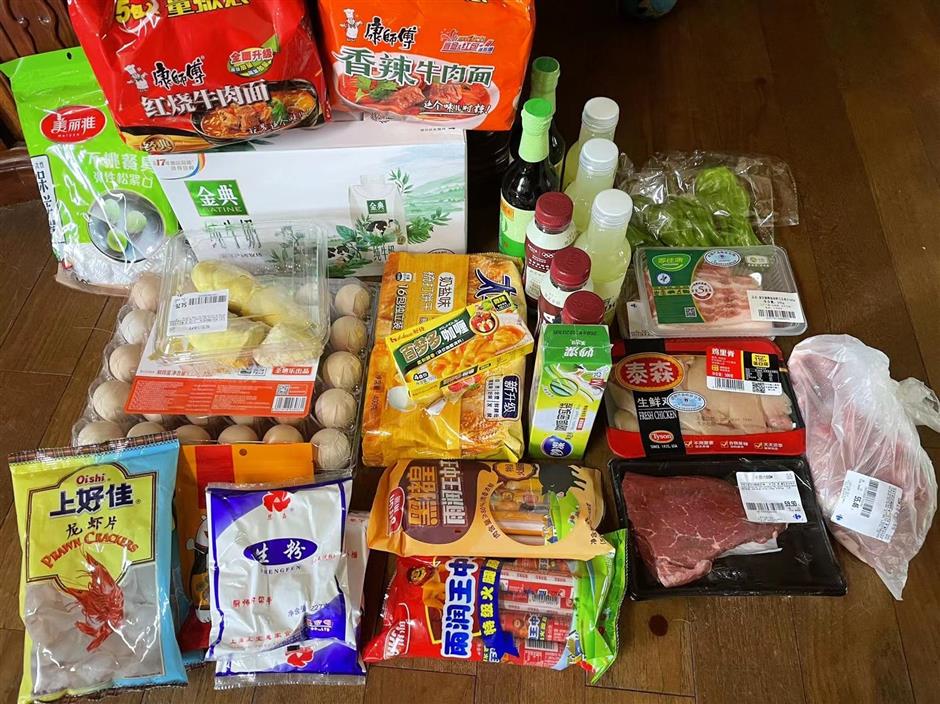 Li bought items such as instant noodles, eggs, curry and beef at Carrefour.

Not everyone has found the new shopping freedoms a blessing.

A 70-year-old man surnamed Xu sat on a bench at a bus stop on Xincun Road, with his empty shopping basket next to him. He wasn’t waiting for a bus. Most haven’t resumed full service yet. He was simply resting.

Xu hadn’t received a Carrefour invitation card that day, but he still made a shopping list and went out to see if any other stores might be open.

“There were few stores open, but I couldn’t walk far,” he said. “So I didn’t get anything.” 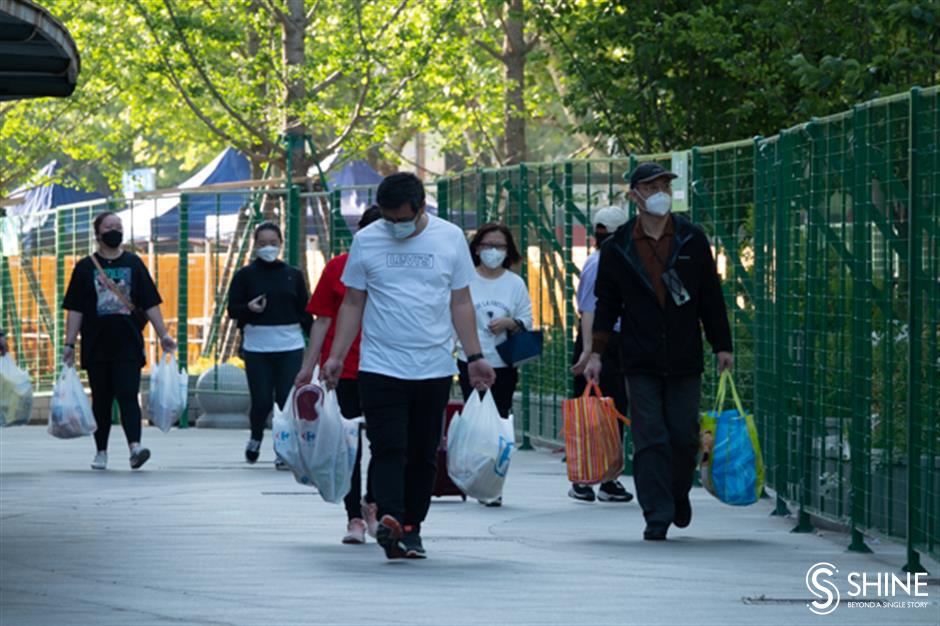 Residents return from the supermarket with full bags.

During the lockdown, Xu learned how to engage in buying groups to ensure that his family had enough to eat. However, items such as yogurt, milk, coffee and beer haven’t been available for more than two weeks.

The medicine he wanted to buy also was not available.

Xu’s wife suffers from insomnia. Before the lockdown, he went to the Wanli branch of the Putuo District Traditional Chinese Hospital to get sleeping pills for her. They have now run out.

Sitting on his bench, he said, “It takes me half an hour to walk there. I’m tired, and I’ll rest here for a while before heading back.” 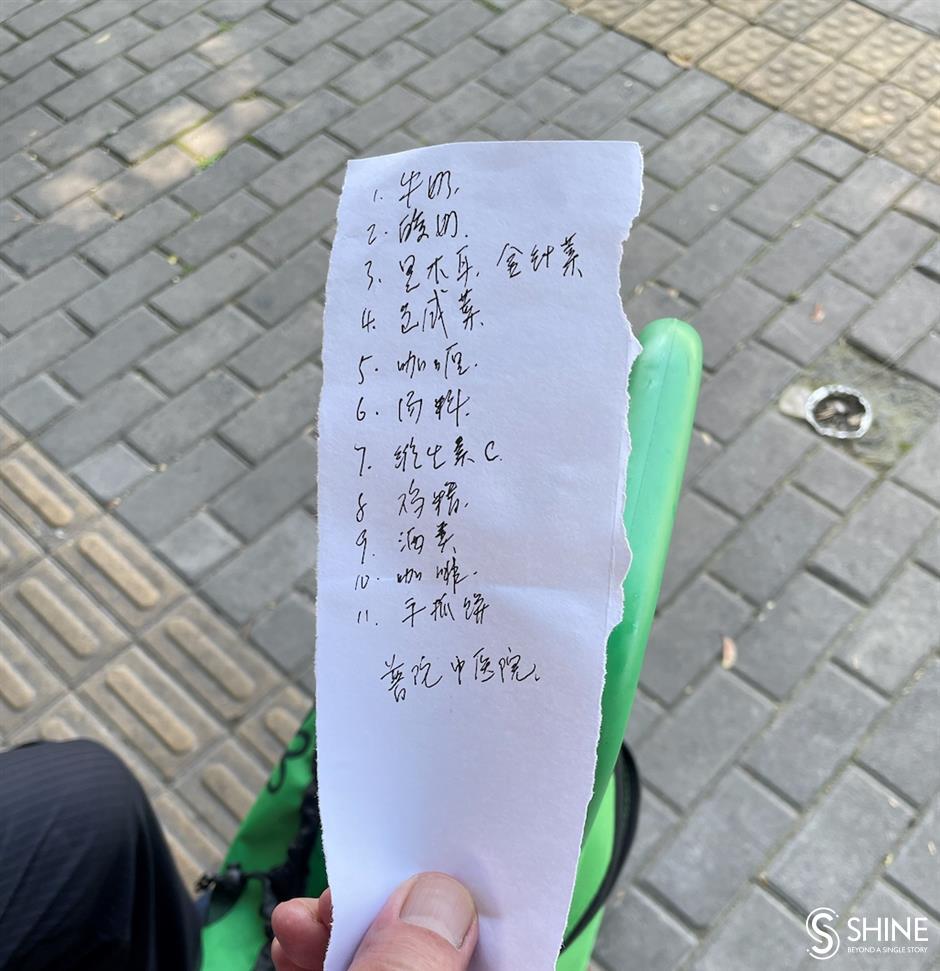 Xu’s shopping list shows that he wants to buy items such as milk, yogurt and coffee. The last line on the checklist reminds him to go to Putuo District Traditional Chinese Hospital.

Some 1,193 of the 1,626 outlets of 12 major supermarket chains in the city had resumed operations as of last week, with 220 stores resuming offline operations, said Gu Jun, director of the city’s Commerce Commission.

In addition to supermarkets, convenience stores are also reopening. However, online takeout orders continue to be the main service mode.

On Xincun Road, a Family Mart convenience store was lit up, but the door was open only wide enough to hand out plastic bags to deliverymen.

Store manager Zhuo Yi said that the store reopened on April 22 and she has been living in the store since then.

“The shop is always well-stocked every morning,” she said. “We begin accepting orders at 8am every day, and there are frequently dozens of orders at once.” 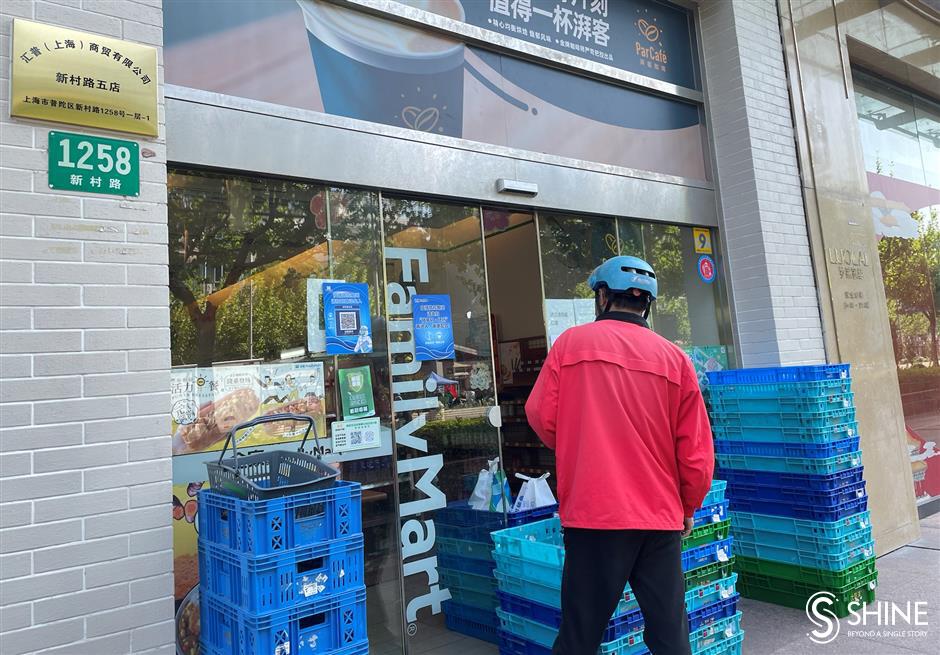 Deliveryman Jiang Cheng waits in front of a Family Mart store on Xincun Road. The door is open just wide enough to hand out plastic bags.

Zhuo formed a WeChat group with customers from the surrounding community. She notifies them of any new items in stock.

As of April 26, Shanghai had 458 Family Mart convenience stores reopened, with more than 80 percent operating on the online delivery platform Ele.me.

Deliveryman Jiang Cheng waited in front of the Family Mart for three orders he had to take to residential compounds.

Jiang works for Ele.me. He said there are significantly more deliverymen on the road now that convenience stores and restaurant chains are resuming online orders.

“The fast food, bakery and fruit stores that have reopened are pretty busy,” he said. 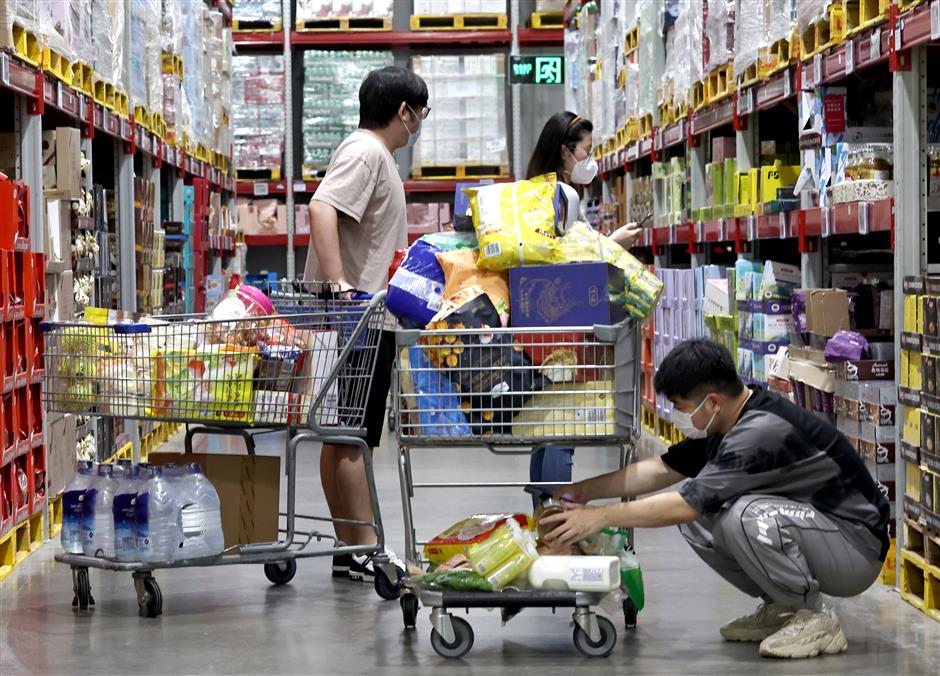 Customers shop at a Sam’s Club warehouse store at Beicai Town in the Pudong New Area.

In addition to Putuo District, citizens within the designated areas in Jiading, Fengxian, Jinshan, Chongming, Qingpu and Songjiang are also allowed to go to supermarkets, drugstores and hospitals in their districts. Private cars are allowed in limited areas, and public transport is being gradually restored.

Residents in five towns in Pudong are also granted some freedom of movement outside their homes.

We use cookies on our website to give you the most relevant experience by remembering your preferences and repeat visits. By clicking “Accept All”, you consent to the use of ALL the cookies. However, you may visit "Cookie Settings" to provide a controlled consent.
Cookie SettingsAccept All
Manage consent

This website uses cookies to improve your experience while you navigate through the website. Out of these, the cookies that are categorized as necessary are stored on your browser as they are essential for the working of basic functionalities of the website. We also use third-party cookies that help us analyze and understand how you use this website. These cookies will be stored in your browser only with your consent. You also have the option to opt-out of these cookies. But opting out of some of these cookies may affect your browsing experience.
Necessary Always Enabled
Necessary cookies are absolutely essential for the website to function properly. These cookies ensure basic functionalities and security features of the website, anonymously.
Functional
Functional cookies help to perform certain functionalities like sharing the content of the website on social media platforms, collect feedbacks, and other third-party features.
Performance
Performance cookies are used to understand and analyze the key performance indexes of the website which helps in delivering a better user experience for the visitors.
Analytics
Analytical cookies are used to understand how visitors interact with the website. These cookies help provide information on metrics the number of visitors, bounce rate, traffic source, etc.
Advertisement
Advertisement cookies are used to provide visitors with relevant ads and marketing campaigns. These cookies track visitors across websites and collect information to provide customized ads.
Others
Other uncategorized cookies are those that are being analyzed and have not been classified into a category as yet.
SAVE & ACCEPT